I received the following (only SLIGHTLY edited) from another SBU professor today:

"I was recently speaking at an American Legion Post downstate in Delhi, New York.  After the dinner and speeches were done a woman came up to me and asked if it was true that I worked at St. Bonaventure and I said yes. She immediately started to cry and wound up just holding me.  I asked her what was the matter and she said that we have no idea how much the help from the BonaResponds students meant to her family and their area recently ravaged by the floods. She went on about that for awhile with several folks listening since they saw her crying, when I left their Post about a hour later she came up and thanked me again and wanted to make sure the folks back at Bonas knew how much that meant. "

I have no idea who the woman was.  No clue. I do not even know if we worked on her home or not.  It could be any of many that were helped on that trip, or a family member, or even just a neighbor who was worried about someone we helped.  I have no idea.

I do know that many many times we have no idea of the residual impact of our work.  (think butterfly in Africa).  We can measure the dollar value of a job, but it fails to measure the true impact.  I know that since graduation in May BonaResponds has provided about $300,000 in services to people.  I report that to the BonaResponds board regularly.  But the true value of this can not be completely measured in US dollars, Haitian Gourdes, or Ghanaian Cedi.  To get the true value you can start with the currency but must also add in hugs, smiles, reduced anxiety, and tears of joy. And as a finance professor who teaches valuation, I just do not know how to value those, so I guess they are priceless :).

Labels: "Thank you", "Thank-You", "what BonaResponds means to me", essays reflections

A few updates on things: (much info, so try to read them all) 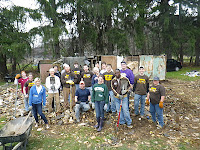 Have a great Thanksgiving and remember to make a difference!

Better to give than to recieve?

'Tis better to give than to receive?:

"Giving to others has benefits," said Inagaki, the lead author of the study....

This Sunday's work day plus more for Notice Board

BonaResponds will be working this Sunday.  The main job will be removing a building that has been destroyed in Limestone.  We will be working with the volunteer fire dept. that will be having a training/controlled burn after we move the materials away from other buildings and salvage anything that we can for recycling.  Additionally there are three homes that need to be made handicapped accessible (installing hand rails etc), a ceiling needs repair, and of course there is another wheelchair ramp request.   We likely will not get through all of these jobs, but we sure can try!  (indeed we were told the house in Limestone would take 100 volunteers 5 days, my guess?  25 BonaResponds Volunteers in a single day!  Let's accept the challenge!


Additionally, we want to ship our next shipment of school supplies, small toys, soccer balls, and other similar items to Haitian Schools over Thanksgiving Break.  Since the earthquake we have shipped about 50 pallets of supplies and the schools report that the students love getting our shipments since they are both useful (pencils etc) as well as fun (toys, crayons, soccer balls).  Additionally this last time we have had some requests from a vocational school in Leogane for tools (hammers, tape measures, etc), from a school near Port au Prince for basketballs, and from a school in Gonaives for all and any kind of musical instruments (we are not shipping a piano!) and sheet music. (all items can be new or used).  (total disclaimer: items in excess of current needs or too expensive to ship will be shared with the poor in the Buffalo NY, Camden NJ, and elsewhere in the US).

If you would like to donate, you can drop off in the Business Dept upstairs in Murphy (my office is 231) or at the Allegany Park and Shop or email me (jimmahar@yahoo.com) and we can arrange pick-up.