It's OK to Cry, A poem from Bob

Bob McGrath is a 1950 SBU alum who is as hard of worker as any of our volunteers.  He worked with us in Galveston Texas after Hurricane Ike and recently in Tuscaloosa Alabama after their tornadoes. He is picture of him (and a group) at Mr. Beesely's house in Holt (near Tuscaloosa) where we worked for most of a day (partially with a crew from EWTN).  Bob is back row with green Star cap on. 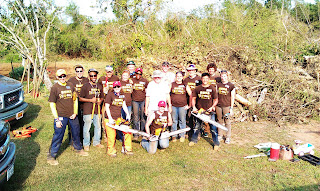 While a very hard worker, he is also a poet.  Here is his most recent work on BonaResponds:


It's OK to cry when the work is done
April Twenty Seventh Two Thousand and Eleven
People in Alabama all looked up to heaven,
Tornados were approaching, the sirens they did scream
One struck with such a fury few folks have ever seen.
The need was overwhelming and many people died
The folks in Alabama were sustained by their pride,
Five thousand houses damaged, many beyond repair
Emotions ranged from hope and faith to gloom and despair
Many of the people who were witnessing the scene
Sat in their living room by their television screen,
Most everyone agreed that the people needed aid
That help in this disaster just could not be delayed.
A few college students up in Olean, New York
Said we can all do something or we can sit and talk,
St. Bonaventure students were joined by friends and grads
The college students rushed to help, joined by moms and dads.
Bona Responds was on the move, young and old alike
Their thoughts were with the victims, just like Hurricane Ike,
The call went out, tweets were sent, off to Alabama,
Everyone involved feared a frightful panorama.
Vans were packed with students, a professor there to lead
The drive was eighteen hours to help the folks in need,
They drove to Tuscaloosa with a rake, a tool, a glove
The main thing that they brought with them; lots and lots of love.
Trees were cut and hauled away, debris was sifted through
Tears and hugs were shared by all, with story telling too,
Chain saws buzzed throughout the day, and long into the night
At sunrise the group set out as soon as it was light.
Clearing up the land was an important thing to do
But lifting people’s spirits made the agenda too,
The Bonnies students worked real hard, also had some fun
All agreed, It’s OK To Cry When The Work Is Done.